You are here: Home / Hunting destinations / Europe / Hunting in Iceland Island offers pure nature with its very thin population and its legendary glaciers and geysers from the interior of the earth. Due to its location on the Mid-Atlantic Ridge, the soil layer is very thin here and the lava has formed a very rugged nature. Depending on the type of hunt and game species, different areas are visited in Iceland and also on the sea around Iceland (Papagenientaucherjagd). 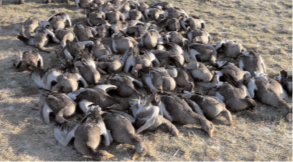 Goose hunting
Goose hunting is a fantastic experience in Iceland. There are 5 different species of geese in Iceland: Greylag Goose, Pink Goose, White Front Goose, Barnacle Goose and Brent Goose. 3 of them can be hunted. The white Vordergans and Brent Gans are protected.
The hunt: A daily shooting rate is usually between 5 – 50 geese for 2 hunters. The success of hunting depends on the shooting ability of each hunter, but weather, temperature and other factors of nature can certainly influence the outcome. During the geese hunt, you can also shoot other species like ducks. We only hunt on wide private fields.

The hunting season is from 20 August to 15 March In reality, the season ends when the geese emigrate to the UK at the end of October. 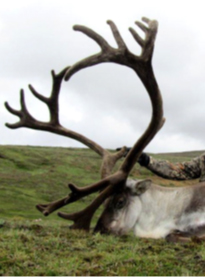 Reindeer hunting
Reindeer Hunting reindeer in Iceland is a uniquely exclusive experience. Every year, 20-30 foreign hunters enjoy the privilege of hunting for these wild and majestic animals in our this rugged land, combined with hot springs, volcanoes and glaciers. The Icelandic reindeer was originally brought to Iceland from Iceland in 1780. Since then, they have evolved through natural selection to survive the Icelandic winters, which are much harder than in Norway. The Icelandic reindeer live only in the wild and has never been domesticated. There are only 800-1200 (50% cows) tags per year and these are mostly given to local hunters. East Iceland is the home of the Icelandic reindeer. Important the tags have to be requested by the 10th of February of each year.

A special early deer season is the 15th of July -31. There is 24 hours of daylight in July. The general reindeer season is from 1st August to 15th September. The best hunting period is from the 1st of August to the 10th of September.

The puffins migrate from Iceland in August and stay in the South Atlantic in winter. They return in April. The active season for Papagei is only from 10th to 25th of April.

Included in the price for Iceland:
Hunting license, firearms license, shipments in Iceland,
one leader per hunter,
Convenient 4×4 vehicle and 6 wheel ATV for every two or three hunters
all equipment during the hunt (except clothing, firearms and ammunition).
Field trophy preparation
Full board and accommodation from arrival to departure. 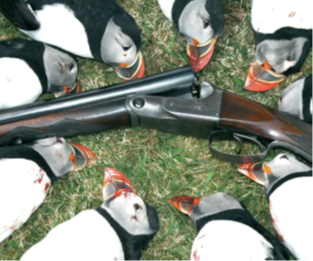 Not included in the price