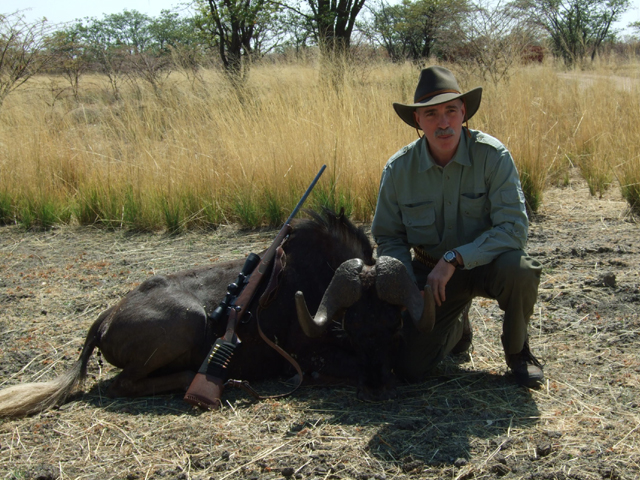 Blue wildebeests are tall and powerfully built. They can be up to two meters long and weigh almost 300 kilograms. The head is narrow but large, with a wide snout and a pronounced forehead. Forehead and bridge of the nose are covered by a dense, black hair cushion. From neck to shoulder runs a long, black mane, and at the bottom of the neck wildebeests have a black beard. The back line falls clearly hab. The long tail is provided with a black tassel. Both sexes carry curved horns, which are significantly smaller in the females. The coat is beige to brown or gray. From the neck to the rear are dark horizontal stripes. White-tailed gnus are slightly smaller than blue wildebeest and have a dark brown coat. The tassel on the tail is very long and white.

Sexually mature males form territories during mating season. These mark them with a body secretion. Male rivals are expelled from the area, passing females are covered. The female is pregnant for eight to nine months. Then it gives birth to a baby. All gnus cast almost simultaneously within a few weeks before the rainy season. A female giving birth is protected from predators by other females. The boy is light brown and follows just a few minutes after the birth of the mother. At the age of two weeks, the gnukalb begins to eat grass. With four to five months they are weaned. Young females remain in their mother’s group, males are expelled and join together to bachelor groups. Females become sexually mature at the age of two, the males only one to two years later.

Wildebeest are very sociable and live together in herds. Female animals and their offspring live in groups of ten to 35 animals. They inhabit an area of ​​two to three square kilometers in area. This area includes several bullfighting areas. The Gnubullas are solitary and live in a permanent territory that defends them bitterly against other cops. In clashes, the cops get on their knees and fight with the horns. These battles are mostly bloodless. Young bulls live in loose groups, but leave as soon as they become sexually mature. Wildebeests are diurnal. They especially use the cool morning and evening hours for grazing and rest at night in the shelter of the herd.

Wildebeest are pure vegetarians. They feed mainly on grasses and herbs. These plants account for 95 percent of their diet. Since gnus love very short grasses, they are often found near elephants and zebras, which prefer the longer grasses. Only when they do not find any grass do wildebeests eat small twigs and leaves. Water is very important: you need to drink daily and you can dehydrate after just five days. For fresh water, the animals migrate up to 50 kilometers.

Wildebeests are very widespread in Africa and can be killed in almost all hunting countries from Tanzania, Zimbabwe via South Africa and Namibia. The hunt for wildebeest takes place both as a stalk hunt and from the Ansitz at water holes. For wildebeest normal calf-ready caliber enough.

If you have any questions or if you are interested in a mediation offer for hunting trips and hunting on Wildebeest please contact us via email or contact form.