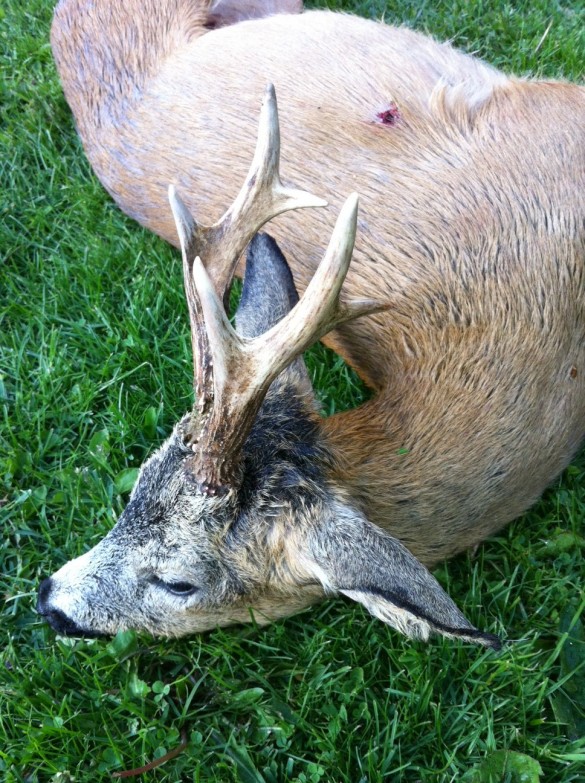 The deer changes its coat color with the season. In the summer it is red-brown, in the winter a gray-brown or, more rarely, a dark-brown color prevails. In young deer (fawns) you can also see bright spots on the back and in the lateral abdominal region. The tail approach (mirror) is white. The snout of the animals framed a black area. Your ears are relatively long with about 14 centimeters. Male deer wear an antler that drops each year between October and November, but immediately begins to grow new under a so-called bass skin. After a new antler has formed, the bass skin dies and the goat rubs it off trees and shrubs.

The rut of the deer takes place from the end of July to the beginning of August. During this time, there are fierce territorial struggles among the goats. After fertilization, a so-called dormancy occurs for four months. That means, the actual gestation period starts in December and then is another good four months. In May or June, the offspring finally sees the light of day. Mostly a litter includes only one or two fawns. You can distinguish them well from the adult animals by their bright spines. The small deer are deposited in the high grass, the mother (Ricke) comes in the first days only to suckle. After a week, the boy then follows the Ricke. Kitzböcke make their first antlers at four to five months. After about a year, the young are self-sufficient, they reach sexual maturity with the second year.

Deer are mainly evening and dusk-active animals. In the colder months, Ricken and her boys join together in so-called “jumps”, which then usually dissolve again in the spring. A jump can span more than 50 animals. There is a regulated distribution of tasks in this community. Individual animals observe the environment while others graze peacefully. As soon as danger threatens, they give a warning signal and an escape movement begins. Especially older bucks live outside the rutting season but rather as a loner and are heavily dependent on the district. Their territory defends them vehemently against intruders and marks it with scent marks.

and communication Deer have a very good sense of hearing and smell, the sense of sight, however, is rather poorly trained. You can only see a light-dark contrast and movements. With unfamiliar sounds, they set their ears pointed and are ready at any time for a quick escape. In dangerous situations, the otherwise dumb and peaceful animals warn the rest of their community by loud noises. Female animals are chirping, mature bucks can make even barking sounds in the mating season – like a dog barking.

During the day, deer hide in the undergrowth, only at dawn, they go in search of food. Often you can then see large groups of animals in the open field or at the edge of the forest. As vegetarians they eat grasses, leaves, young shoots, herbs, acorns, wild berries and fruits. Rarely does it happen that they include crops and tubers in their diet. And they do not like one thing: dewy grass.

Deer are spread all over Europe and parts of Asia and can be hunted in all countries. The type of hunting varies between stance, stalking, leaf-luring and cherry hunting. For deer calibers from 5.6mm are sufficient but may vary depending on the state law.

If you have any questions or are interested in an offer of mediation for hunting trips and hunting for deer, please contact us via email or contact form.