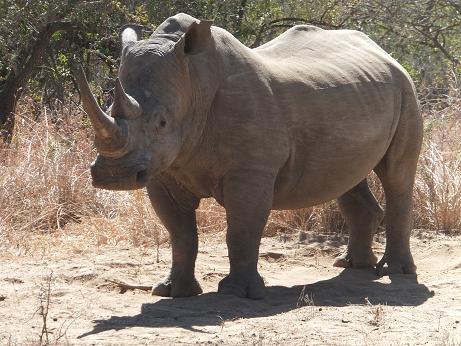 The white rhino is the largest of all rhinos. It has a heavy and massive body. Males are almost four meters in length and weigh up to three and a half tons slightly larger and significantly heavier than females. The rhino has a long head with a wide mouth, small eyes and rounded ears. Both sexes carry two horns above the mouth. The front is significantly larger than the rear. It can be up to 1.50 meters long in males (bulls). At the neck, the rhino has a bump of muscle and connective tissue. The limbs are stocky and strong. White rhinos have a thin tail that is up to 70 inches long. Except for the ears and the tip of the tail, the animals have no hair. The thick skin has a slate-gray color.

A mating rhino female chooses to separate from its group and often marks its environment with urine. If a bull is interested, an extensive foreplay begins. The rhinoceros sniff each other, rub against each other and make fake fights. The actual mating may take over an hour. After a gestation period of over 16 months, the female gives birth to a baby. The cub weighs about 80 kilograms and is able to follow the mother within a few hours after birth. Although the young rhinoceros begins to eat grass at the age of one week, it is nursed by the mother for about a year. If the offspring is about two years old, the female is ready to mate again and sells her cub. Often, however, this comes back to the group of the mother, as soon as the new sibling is a few weeks old. Females become sexually mature at the age of about six, males only a few years later.

White rhinos are active during the day. They go in search of food, especially in the cool morning and evening hours. Females usually live in small groups with same-sex members and with their offspring. The cohesion in these groups is strong. Threatening danger, the females form a protective circle around their young. Adult males, however, are loners. They live in fixed areas that can cover up to two square kilometers. Also the groups of the females live mostly in the same area. However, the areas of several groups may overlap. Although rhinos usually travel in a relaxed manner, they can run at a speed of up to 40 kilometers per hour at risk.

The smell is the most important meaning of the white rhino. It helps to find food and to recognize conspecifics. Due to the small eyes, the sense of sight is very weak. At a distance of 20 meters, the rhino can barely see anything. Also, the hearing is not well developed.

The white rhino is a pure vegetarian. It feeds almost exclusively on many species of grasses that grow in its native land. Water is very important for these animals. They prefer to stay close to water. If there is no water station nearby, they will take long hikes to cover their water needs.

White rhinos are now found in only a few countries and are highly threatened by poaching. The only country in which a hunt is still possible, is currently South Africa where a targeted rearing program takes place and the targeted hunting of individual bulls to finance the protection against poaching is necessary. Since in the past the hunting of Vietnamese horn dealers was abused, a hunter’s CV is now required and he has to prove that he has already killed other big game. Prior to this tightening rhinos were hunted by Vietnamese non-hunters legally as a trophy but then the horn sold expensive in Vietnam. The hunt itself is usually carried out as a stalking hunt. For hunting rhinos, the minimum caliber 375 H & H is just like in almost all big game. Due to the sturdy armor plates hard bullets and stronger calibers are recommended.

If you have any questions or are interested in a mediation offer for hunting trips and rhinoceros hunting, please contact us via email or contact form.