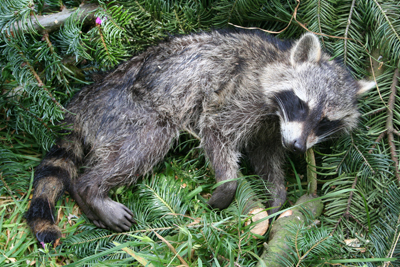 Raccoons have a black face mask, which is bordered by white fur. The fur on the body is dense, long and reddish brown to gray mottled; sometimes black pests also appear. The curious little bears have a pointed head and rounded ears, and their paws are armed with sharp claws. Particularly well-known are the small ruffians for their bushy tail with the stripes, which can become up to 40 centimeters long and are therefore often just as long as the body itself.

The mating season is in the cold months, ie in the northern hemisphere between December and March, while the South American crab bear starts in September. After a gestation period of about two months, one to seven boys are born in a shelter, who are blind and deaf for the time being. They are about 15 inches tall and usually weigh around 70 grams. At the age of about one year, they themselves become sexually mature; however, a large proportion of young raccoons do not survive the second year of life. Water buffalo are very sociable and live in herds of ten to 25 animals. A herd is led by a lead cow. Only old bulls live as loners. At mating season, the herds disintegrate and a bull flocks several females around. Water buffaloes are diurnal. They prefer to stay near water or mud holes where they bathe often and extensively. Only in the evening, they go foraging. Water buffaloes are fleeing. With signs of threat, they immediately seek the opportunity. Water buffalos inhabit a territory of up to 1,000 hectares. However, the territories of individual herds may overlap. The animals are considered wise and adaptable. Touch and smell are well developed, which is especially noticeable when dealing with food. While all species are very skilled climbers, the crab-raccoon also emerges as a gifted swimmer.

When searching for food, the little forest dwellers especially use their sense of touch and smell: they reach into inaccessible crevices, stone crevices and other potential hiding places and feel their fingers for prey. This is then examined in detail: The raccoons sniff their catch and turn it in the hands back and forth, rub or roll it around and then sniff again. The crab raccoon feeds mainly on crabs, the other species are typical omnivores: plants and cereals on fruits and nuts, insects, worms, snails, rodents, bird eggs, fish, amphibians and waste do not scorn the cute little bear.

Raccoons are at home on almost every continent except Australia. They can be hunted in most countries. The hunt takes place usually at the Ansitz at Kirr or Luderstellen upper as coincidence with the stalking. For raccoons, the small ball or shot is sufficient.

There are no targeted hunting trips on raccoons

If you have questions or are interested in a mediation offer for hunting trips and hunting for raccoons, please contact us via email or contact form.