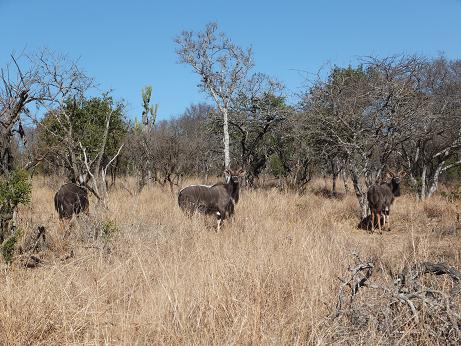 Differences between the two sexes consists mainly, besides the long horns, in the body coloring. Females, as well as the young animals also, have a reddish brown base color, while the males are gray to dark gray colored. Both sexes are in possession of up to 18 white, across the body distributed, narrow horizontal stripes, which pattern may vary from animal to animal. In addition, males have a mane, which leads from the head over the back to the tail.

Although nyalas are not tied to a fixed mating season, most mating takes place in the spring. The cycle of a female is about 19 days, of which she is only 6 hours receptive. After successful mating, the female gives birth to a calf about 5 kilograms after a gestation period of about seven months. Shortly after birth, the young are led into the thicket to protect them from predators. After about 20 days, the young animal goes out of hiding for the first time. A cub, if it is a male, remains with her mother until the birth of another calf. Females, on the other hand, can be the whole life of the mother group. Sexually mature with about 18? 24 months. The life expectancy is 13 years.

Its distribution area is located in southeastern Africa. They can be found from Mozambique to Zimbabwe, South Africa and Botswana, where they were introduced here by people in various national parks. Their habitat consists of forests, but it is close to water. They live in groups of up to 30 animals. These consist of females and their cubs. Males live as loners or in bachelor groups. Often loners meet at the water points. However, fighting only occurs when mating males are nearby. These fights are so fierce that they have already reported deaths. Although the Nyalas are also active during the day, they count as dusk and nocturnal. During the day they stay in the thicket and protect themselves from the heat and from enemies. These enemies include, among others, lions, hyenas, wild dogs and leopards.

Nyalas feed exclusively on herbal food. In addition to grasses and leaves, these include flowers and herbs. From time to time, fruits are also often eaten. They depend on water and therefore seek water sources daily.

Nyalas are mainly hunted in South Africa and partly in Namibia. Their original area is ZuluNatal in South Africa which provides ideal living conditions for these antelopes. The hunt for the Nyala is mainly done as a stalking and can be combined with sitting at the waterhole. For hunting all calf capable of high game are sufficient.

If you have questions or are interested in a mediation offer for hunting trips and hunting on nyala please contact us by email or contact form.