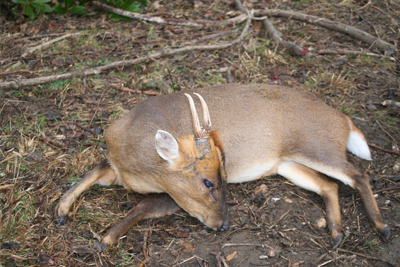 At a shoulder height of 45 centimeters, the muntjak is one of the smallest deer species. The male has a simple, very pointed, 15 centimeters long antler with one or two ends. It is dropped after the mating season. After that grows a new antler. In addition, the Muntjakmännchen, the only deer in the upper jaw extended canines, which protrude from the mouth. They are two to five inches long and dagger-like. The fur coloration of the animals is, depending on the type, from yellowish to greyish brown to dark brown. Sometimes there is a bright spot drawing.

Muntjaks reach their sexual maturity with twelve months. The mating season is not tied to a fixed season. A muntjac has a gestation period of seven months. After that the female in the undergrowth gives birth to one or two cubs. The fawns have the typical white staggy coat color for deer. As a result, they are well adapted to their environment and thus protected from enemies. The nursing time is two months. After six months, the young leave their mother.

Muntjaks are loners and rarely seen in small groups. Both male and female muntjaks defend their territories. The male marks his territory with the help of a gland on the head. If another male approaching his territory, it comes to fight, with more of the canines than the antlers serve as a painful weapon. The hooves of the Muntjak are also used in fighting. These are very angular and can cause deep wounds. Muntjaks are both day and night active. However, many species are most active at dusk time. In addition to humans, tigers, red dogs, crocodiles and giant snakes are among their main enemies. When Muntjak discover an enemy, they trigger a warning call that reminds of the barking of a dog. Therefore, they are also called Bellhirsche.

The food of the Muntjaks is mainly vegetarian. It consists of herbs, buds, fruits, seeds, berries, leaves, barks and flowers. Hard grasses and nuts are also on the menu. In rare cases, a muntjak also eats eggs, small animals or carrion.

Muntjaks are originally from Asia, but were introduced in England during the colonial era and have proliferated very much. Today, england is the only country where the shy muntjaks can be hunted. The hunt takes place almost exclusively as a stalking hunt in the forest or Den Waldrändern. There are also ways to combine this with the Ansitzjagd. For the Muntjak normal roe deer calibers are sufficient

If you have questions or are interested in a mediation offer for hunting trips and hunting on Muntjak, please contact us via email or contact form.