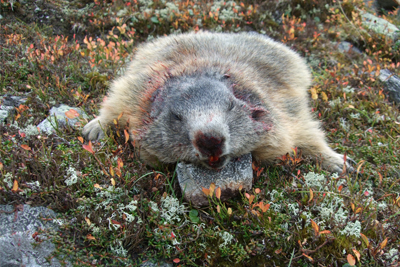 The Alpine Marmot has a stocky, conical body. The transition from body to head is fluid. The small head is slightly rounded at the snout. The ears are small, round and close to the head, the eyes are dark. The marmot has four long teeth that grow throughout life. The limbs are short and strong. The paws are hairless. There are four toes on the front paws and five on the hind paws. All toes are provided with long claws. The tail is short and bushy. The alpine marmot coat is dense and shaggy. The shades range from light gray to gray brown. The tail is usually a bit darker, the tip is black. The coat is slightly lighter around the muzzle. Males and females hardly differ at first glance. Males may be slightly taller and darker.

Alpine marmots mate in April and May, shortly after they have woken up from hibernation. The highest female of a group mates with several males. Even lower-ranking females are often covered. Through battles with the highest-ranking female, however, the other females often lose their fetus again. The female is pregnant for about five weeks. Then it will give birth to two to seven kittens under construction. The boys are naked, blind, deaf and weigh about 30 grams. The mother suckles her offspring for six weeks. At the age of one month, the little marmots open their eyes. Meanwhile, they already have a fur and teeth. Now they are leaving the building for the first time with their mother. They start eating solid food early enough to eat winter bacon. At the onset of winter, they weigh about half as much as an adult alpine marmot. About a third of the young do not survive the first winter. Alpine marmots become sexually mature at the age of two.

Alpine marmots are sociable, diurnal animals. They live in family groups that are led by a male and a female and can include up to 20 animals. In a family strong ties develop. The marmots play with each other and care for each other’s fur. Several of these families often form a loose colony. Marmots spend most of their lives underground. They create extensive buildings with many tunnels and chambers. These buildings are often expanded over generations. They serve as protection against enemies and the hot midday sun and beyond that for the rearing of the young animals. Alpine marmots are territorial. The area of ​​a group covers about two hectares. However, the animals rarely move far from their construction. From October to March marmots keep hibernation. During this time they do not eat any food and wake up only about every four weeks to release feces and urine. The mortality rate during this time is very high.

The eyes of the Alpine Marmot sit sideways on the head. Thus, the animals are equipped with a very good eyesight. Also the hearing is very good and sensitive. So the marmots are warned in time of enemies and can flee to their building. The sense of smell, on the other hand, is poorly developed.

In the spring, the Alpine Marmot feeds mainly on roots, young shoots and branches. In summer, various plants that grow on the alpine meadows are on the menu. The marmots eat mainly plants that are rich in unsaturated fatty acids. These include Alpine clover, motherwort and mountain plantain. So they eat a reserve of fat for the winter. Insects and worms are also on the menu of marmots. Although the food supply in the summer months is more than sufficient, the alpine marmot often has little time for food intake. When the heat is too high, they do not abandon their construction, and predators and people often drive them away from the alpine meadows.

Marmots are hunted in the Alps in both Austria and Slovenia. The hunt is usually stalking the marble, which have their posts on the rock formations or wait for promising spots. For marble, the small ball and full coat is usually used.

If you have any questions or are interested in a mediation offer for hunting trips and hunting groundhogs, please contact us via email or contact form.