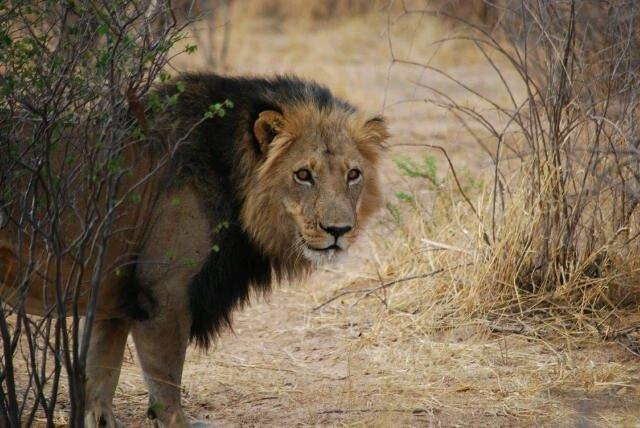 The “king of the animals” has a massive, powerful physique. His coat is short and colored in many shades of sand yellow over ocher to dark brown shades, with belly and leg inside are always lighter. The lion male additionally wears a mighty, darker head mane that can reach to the stomach and shoulders. The state of the mane says a lot about the physical condition of the animal: on a thin, short mane also recognize other lions that the animal is weakened, sick or quite old. Even lions who live in captivity have a less magnificent coat. The smaller Asian lions, however, are naturally equipped with a shorter mane than the other subspecies in the steppes of Africa.

Only the male leader of the pack can mate with the lionesses of his group – but only if the female signals her readiness. Then the couple splits off the pack and often spends several days in togetherness. The birth occurs after about 100 days away from the pack in a sheltered place. After four weeks, the mother then returns with the offspring to their conspecifics and introduces their usually two to four boys. Within 18 months, they are self-employed and mature after two to four years. From this point, male animals can try to scare off their packs through fighting.

The lion is the only cat species that hunts and lives in packs. A pack can consist of up to 30 animals. The 20 to 400 square kilometer areas are characterized by roaring, patrolling and scent marks. Old, rejected and young males can also wander around individually. In the nature of the two sexes, there are great differences: in contrast to the females who almost never fight or compete with each other, and even care about the offspring of others, males are also very aggressive within the pack, especially in feeding behavior. When a lion conquers another’s “harem,” he first kills his predecessor’s pups to make the females ready to mate and rear their own offspring.

When hunting, the lions usually rely on their strength as a group to kill prey. This task is mainly done by the females. Although they can reach speeds of up to 60 km / h, they usually take a strategic approach: at first they sneak up to a few meters to the prey. Then it gets scared and circled. The animal is then killed with a strong stroke or a bite in the throat or the neck. Among the classic prey animals are gazelles, antelopes, buffalos and other ungulates. Now and then mice, reptiles and insects are also eaten.

Lions can be hunted in different countries, including Tanzania, Zimbabwe and South Africa. The hunt for lions takes place differently depending on the country. In South Africa, she is on the track running out of a fresh lion track is going out. Zimbabwe mostly hunts on the bait and sometimes on the track. For hunting, calibers from 375 H & H upwards are required.

If you have any questions or are interested in a mediation offer for hunting trips and hunting for lions, please contact us via email or contact form.