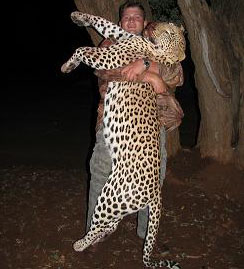 Since it is very adaptable and inhabits many different habitats, its appearance is very different. Leopards that live in the forest are small and squat. The animals of the grasslands, on the other hand, are slim and tall. On average, the leopard reaches a shoulder height of 60 centimeters and is up to 1.50 meters long. The fur pattern varies with the many subspecies. However, most of the fur has a yellow base color and dark rosettes. The underside of the approximately one meter long tail is colored white. A special feature are black leopards, which are also called Panthers. The expression of the black coat is hereditary. In sunlight, however, the rosette pattern is also seen in these animals.

At about three years, leopards become sexually mature. The females are then ready to mate once a month for a week. By urine marking it signals the males this readiness. If a partner has found, the animals mate for about eight days. If the female is pregnant, she gives birth to two or three boys after about three months. The babies weigh about 500 grams at birth and have a gray coat. The first weeks the mother hides her offspring in caves or buildings. Not infrequently, the father of the mother is at the rearing and education. When the kids are big enough, they accompany their mother on the hunt. Leopards suckle their offspring three months before the kids are switched to solid food. In their second year of life, the boys separate from their mother. Males often capsulate slightly earlier than females.

Leopards are loners. Apart from the mating season, they are very careful not to encounter a conspecific. They live and hunt in a fixed area, which they identify with urine and scratch marks. If other leopards invade the area, they are chased away with threatening gestures. If the intruder does not retreat, fatal struggles can occur. The Leopard is an excellent climber and an energy-saving hunter. He likes to sleep in trees and can climb headfirst down a tree trunk. In the hunt, the big cat creeps up on its prey to catch it with a leap or she lies in wait and waits patiently until her prey runs in front of her nose.

The eyes are one of the most important sensory organs of the leopard. They are directed to the front. As a result, the fields of vision overlap and the animal can estimate distances very well. Like all cats, the Leopard looks very good in the dark. The leopard’s hearing is well developed. The mobile ears are especially important for orientation. The tactile hair also fulfills the same function. With them, the big cat is oriented in tight buildings and caves. The leopard has a pronounced sense of smell, which plays a significant role in mating and turf marking.

The diet of the leopard depends on the available food supply. If possible, the leopard will attempt to capture medium-sized ungulates or even small predators. Thus, depending on the region, various stags and antelopes are as much on his menu as mullets or jackals. If the leopard has no opportunity to kill this animal, it also feeds on birds and reptiles. Only in the greatest need he also eats insects. The leopard hunts in the cool evening hours. If he has killed an animal, he often tows it on trees to prevent larger predators, such as lions or hyenas, stealing his prey

The leopard can be hunted in different countries in southern Africa like Namibia, South Africa and Zimbabwe. The shy cat is mainly hunted on Bait which was specially prepared for the hunt or even better is the Ansitz on a fresh crack as the leopard in contrast to the cheetah usually always comes back. As a caliber 308 is suitable upwards with stronger calibers such as 8x68s or 300 Win Mag would be recommended with good fragmentation floor.

If you have questions or are interested in a mediation offer for hunting trips and hunting on Leopard, please contact us via email or contact form.