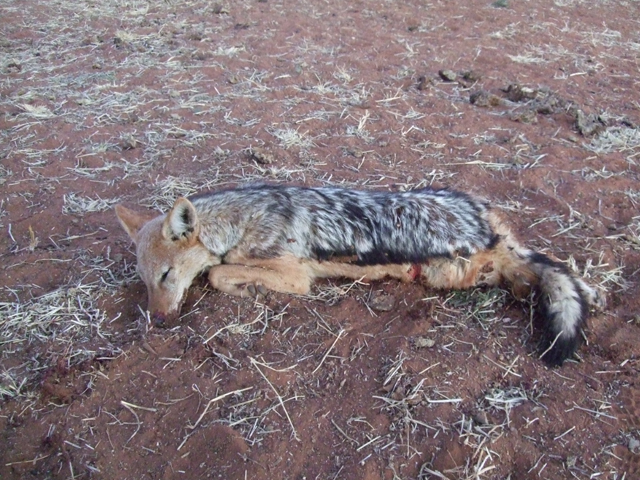 Outwardly, jackals are probably the most typical representatives of the dog family. What they all have in common is the pointed face and their slim physique – which makes them nimble runners. Gold jackals in more southern areas have a more golden-brown or rust-colored coat, those further north are greyish-colored, and in East Africa their color changes even with the seasons. The Schackrackenschakal owes its name to his back fur, which is set off darkly from the remaining coat: It is reminiscent of a rectangular saddle cloth for horses, which is also called “Schabracke”. Striped Jackals are quite easy to spot on the white tip of the tail, the rather gray coat with dark broad stripes and a stocky body. The only endangered jackal, the Abyssinian species, is often referred to as the “Ethiopian wolf”. The animals are the largest among the four species and have a reddish coat; the body underside and the legs of the animals are white.

The wild dogs form solid couples; These partnerships often last until the death of an animal. As soon as the breeding season begins, the male does not let his lady of the heart out of her sight. Like the wolves, jackals perform a small “wedding dance” before mating. The “hanging”, which also occurs in many other dogs, occurs: Immediately after mating, the male can not be released from the female for a while, because his penile swelling prevents it. This can take up to 40 minutes. After about 60 to 70 days, an average of six young are born. The male participates in the rearing; he leaves the construction to the female and his offspring and watches very vigilantly that no other animal comes too close to them. Even if the little ones are fully grown, they remain in the typical “family associations” for a while; after one year young males usually go their own way.

Jackals live mostly in natural or taken over by other animals caves, but dig in rare cases, even a construction in the ground. They live mostly in pairs or family associations, the golden jackals in smaller packs, which are always led by a male. Their territory they defend vehemently against invading conspecifics. A male and a female often remain a couple for life. Especially Goldschakal partners have a very gentle ritual: they mutilate each other’s fur. The black-headed jackal is sometimes found alone, and its relatives, the striped jackals, sometimes even alone. He is mostly traveling at night, while the other two species are the most active at dawn and dusk. Communication The lively four-legged friends have a wide repertoire of sounds. They screech, yelp, whimper, whine, and start wolf-like howls when it comes to hunting. It is sometimes observed that they follow the lion in the hunt, and as soon as their foray is successful, they start a siren-like, plaintive tone. The area marked with urine and feces. To greet a known conspecific, they seemingly throw themselves against his body.

Contrary to popular belief, jackals are not just scavengers by far. Individually, in pairs or on the way, they are capable hunters. Anything is eaten: insects, birds, eggs, reptiles, rodents to medium-sized mammals and occasionally smaller livestock. In addition, the animals also occasionally take plants and fruits as well as carrion. If there are larger cats in the habitat, the slender wild dogs also like to use the leftovers, the lion and Co. left of their meals. Only the Abyssinian jackal feeds mainly on rodents.

Jackals are a common representative in most southern African hunting countries such as Namibia, South Africa or Zimbabwe. Jackals are best hunted at the bait or as a coincidence stalking antelope. As caliber normal roe deer calibers and larger are sufficient.

If you have any questions or if you are interested in a mediation offer for hunting trips and hunting for jackals, please contact us via email or contact form.