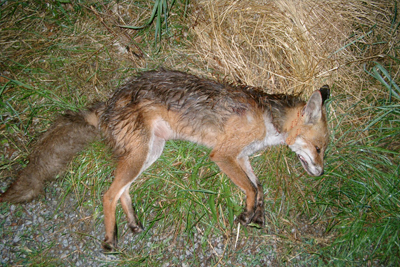 With the petite wild dogs you first connect the long, bushy tail that makes up a good third of the total length. They have a rust-red or light-brown fur, which, however, passes over to snout, breast and belly in white. The tail and the pointed ears of the predators are darker colored. Sub-species living further north are often slightly larger and heavier than their counterparts in the southern habitats. Although they belong to the dog family, they have cat-like amber eyes. The pupils are oval rather than circular, as in most other dogs. A vixen is also called “fart”, male animals are called “male”.

The mating season of the shy four-legged friends is in January and February. It is not uncommon for the animals to reunite with the same partner every year. Although they are loners for the rest of the year, they still provide their offspring for a while and prove themselves to be exemplary parents. When most of the three to five puppies are born in the safe Fuchsbau after about 50 days of wearing, their eyes are still closed. The male brings the mother food to the building, and as soon as the boys are no longer nursed at the age of four to six weeks, they get their share of it – in the beginning only in pre-digested form. You finally have to get used to solid food. From September, the young males leave the parental area, the females stay a little longer. At ten to eleven months, the young are finally fully grown.

As already mentioned, the domestic predators are usually on their own, mostly at night and at dusk. They are very local, often live in the same building for years. These residences are mostly dug in the ground and have several “emergency exits”. It happens that a fox takes over the dwelling from a badger or sometimes even forms a shared flat with such a “landlord”. There is no hibernation with foxes, after all, they have to go in the cold months on dating and provide for offspring.

Red foxes are probably colorblind, but their hearing alone makes up for this handicap. They listen extremely well and can also hear very high tones that people do not even register. In addition, their sense of smell is particularly fine: they sniff odors up to 400 times better than we do. Even the phrase “smart fox” comes not by chance: When the biologist Felix Labhardt wanted to catch some specimens for research purposes, he soon realized that it takes more than one bait to outsmart the crafty four-legged friends. They quickly found a way to steal the food pieces without the trap snapping shut. Labhardt wrote, “Undoubtedly, the Fox noticed human traces of scent on the trap and was aware of a danger, and it seems that he had insight into the functioning of the trap, probably without ever having experienced it, and all in the darkness of the night. ”

In hunting, foxes, like almost all predators, have a very specific tactic. They sneak up on the prey and then jump towards them. On the other hand, they do less hunt, as the four-legged animals usually have no chance of doing so. Mice catch them in their very own way: The fox jumps vertically into the air and presses the animal on landing firmly on the ground. Then the prey is killed with a bite in the neck or neck or simply shaken dead. In choosing their menu, the cunning robbers are not demanding: Whether wild birds and their eggs, deer, small mammals, snails, grasshoppers, worms or berries and fruits – hardly anything is spurned.

As a cultural successor, the red fox occurs in most Eusopean countries. The hunt takes place in the form of trap hunting, dog hunting, Ansitz am Luderplatz or during hunts. For the fox either shot or the small ball is used

There are no direct hunting trips to Red Fox