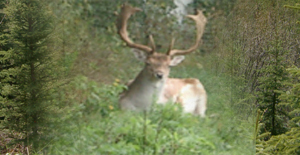 The coat color of the fallow deer varies greatly with the season. While in summer it has a brown-reddish color with light spots on the back and a black eel line, the winter coat is rather brown-grayish and without noticeable spots. The white tail spot, also called mirror, is outlined in black and divided by a 15 to 20 centimeters long tail, the fronds. The frond is black with a white border. Breeds also produce complete black, white or “porcelain” fallow deer. Also characteristic is the shovel antler of the male animals. From the second year of life it starts to train, every year a new scion is added until it has reached its final size. It is dropped between May and June and then grows new. Female animals do not own antlers.

The rutting season starts in mid-October. The males carry out rival fighting for the females, but usually end without injuries. The gestation period is about 240 days. The cub is born in May or June in a sheltered place. It weighs about five kilograms, has brownish fur and many bright spots on the back. For about two weeks, the boy is hidden and the mother comes to suckle and cleanse it. This is followed by the mother’s newborn. After about four months, the suckling time is over, but the young usually remains in the maternal group until sexual maturity. Females reach reproductive age at around 18 to 24 months, males at 3 to 4 years. But since the bucks are not yet strong enough and mature at this stage to prevail against competitors, they begin with the mating only at five to seven years.

Fallow deer are very shy animals and therefore mainly dusk and nocturnal. Only in very quiet places, where they are not disturbed, they are also active during the day. Through their good eyesight, they can even perceive dead animals and are always ready to escape. The sense of smell is also good, but the hearing is less pronounced, therefore, the fallow deer are mainly based on their visual perception. They live very local in different packs. Young deer can be found in so-called bachelor groups, mothers with their calves stay among themselves and adult deer either form their own groups, or live solitary. The communities can range from 20 to 100 animals. Only at mating season, the different groups are together. Although the fallow deer prefers light middle forests, it is very adaptable. He is also found in completely different areas, for example in dry, rocky scrubland or in the dunes of the North Sea island Norderney.

Fallow deer are pure vegetarians. Foraging they usually go in the early morning and evening hours. They feed on grasses and foliage, herbs, needles, buds, shoots and tree fruits such as acorns and chestnuts. Food shortages cause them to nibble on the bark of trees. However, fallow deer does not cause as much damage here as does the red deer.

Fallow deer are very adaptable and can be found in most European countries as well as in South Africa, Argentina and the USA. The hunt for fallow deer takes place as a stalk or from the Ansitz. Depending on the hunting country, there are different caliber requirements, but as a rule, all approved in Germany high-caliber are allowed.

If you have any questions or are interested in a mediation offer for hunting trips and hunting fallow deer please contact us via email or contact form.