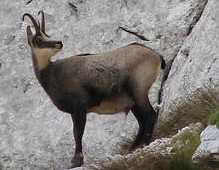 Chamois are about the size of deer. They have a strong, stocky body and a long, slender neck. The short head narrows towards the nose. Chamois have pointed ears and a short tail. The legs are strong, long and end in big hooves. Both males and females carry horns that can be up to 25 inches long. Behind the horns are glandular organs, which secrete a greasy secretion during the rutting season. The coat of the chamois is reddish brown in the summer, with brighter spots on the belly, throat and neck. The cohorts have a black eel line and black stripes from the ears to the eyes. In winter, the brown pelts are darker and the light whiter.

Chamois are brisk from October to Deceber. During this time, the males join the female packs and defend them against rivals. The females are covered, it takes 160 to 190 days until the boy is born. A cham usually gives birth to only one fawn, sometimes two. The first few weeks remain under mother and child. Only then do they join a group again. The fawn stays with the mother until it is covered again. Once the sibling is born, the mother sells the older fawn. With three to four years, the young Gams then sexually mature.

Chamois are very sociable. Social contacts are usually more intense in summer than in winter. The females and their cubs live together in packs of about 20 animals. An adult female assumes the leadership of the entire group. Chamois always live in the same area. The male animals are usually solitary. Outside the rutting season, they are sometimes found in packs. In late summer, they join female herds. Chamois are diurnal and in the truest sense of the word. These cloven-hoofed animals are very playful and like to do leapfrog jumps, which can degenerate into real dances.

Chamois can see well. Especially taking movements she was quick, which is important so that they recognize enemies in time. The smell of the animals is also good. He is important for the social interaction. Although chamois can hear very well, this sense is not always reliable. The animals are easily irritated by the echo and then run in the wrong direction.

Chamois especially use the early morning and evening hours for foraging. During this time, they mainly eat grasses, herbs, lichens and mosses in the summer. Sometimes they also taste mushrooms. In winter, the food of the animals consists of leaves, shoots and buds of shrubs and conifers. Chamois are very frugal and have become accustomed to the scarce food supply in their habitat.

Chamois are found in various mountain regions of Europe such as Slovenia, Austria, Croatia, Romania, Spain and Turkey. In addition, they can be hunted in New Zealand. The type of hunt is mainly the Pisch which can be combined with Ansitzen at promising places. For the chamois fast caliber with a stretched trajectory are recommended as they are sometimes shot at longer distances.

If you have any questions or are interested in a brokerage offer for hunting trips and hunting for chamois, please contact us via email or contact form.