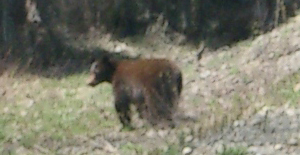 Before the lion was known in Europe, the bear was considered the “king of animals”. But the look of the impressive colossi can be quite different, because as so often the name seems to suggest something: within the brown bears there are numerous subspecies, which in their coat colors of reddish with a yellow cast over brown and gray to black all tints can have. Also, size and weight vary; Here the “Bergmann’s rule” applies, which says that the animals get heavier and bigger in colder regions. Basically, the bearded ladies are always smaller than the males. The largest subspecies is the Kodiak bear Alaska.

Brown bears do not have firm rutting times. In order for the boys always to be born in the shelter of a safe cave, a “dormancy” sets in after the fertilization, so that the wearing time can vary between six and nine months. The birth does not take place until the mother has retreated to her habitation for winter rest. The one to three boys weigh initially only 400 to 500 grams and are still blind. At the age of about five months, they leave their nursery for the first time. Now the caring mother takes good care of her little ones; During this time females can react very aggressively when they see their bear children in danger. They then scare their offspring onto a tree and confront the attacker or run away to attract his attention. Young female bears become sexually mature at about two years; the males only with three. At the latest then it is time for her to leave her mother.

Before the weather gets cold, the bears often wander hundreds of miles to find places with abundant food supply so they can eat a thick layer of bacon. In the winter months, the twilight and nocturnal brown bears then retreat to a rocky or earthy cave, where they wait for warmer days when half asleep. This resting place they previously padded with plenty of greens and branches. But you can not talk about a “true hibernation”, because they wake up easily and their body temperature drops, if at all, only a little. There are only bonds between the bear cubs and their mother, otherwise the animals are strictly solitary. In addition, they have solid territories, but they are not defended. If they ever feel troubled by a troublemaker, they often sit up – this can probably be understood as a threatening gesture.

The brown bear is a classic omnivore. It feeds on plants, mushrooms, roots and berries, but also likes to attack all sorts of animals – insects, snails and small rodents are as much on the menu as fish and carrion. Behind larger animals such as deer, European brown bears are less common, but when it does, it kills the prey with a powerful blow to the head or neck. The Grizzly in the Rocky Mountains of North America, on the other hand, often likes to eat large mammals like elk and bison.

Brown bears are to be found in Europe especially in the east and southeast, as well as in almost all of Russia with their size increasing from west to east and the largest bears usually live on Kamchatka. In North America, they come in various forms from the US across Canada to Alaska. Alaska is the strongest subspecies of the grizzly bear. The brown bear can be hunted in some European countries as well as in Russia and Alaska. In British Columbia, the Grizzlies are now completely under protection The hunting of brown bears takes place both from Ansitz such. on wheat fields in Russia or on the Kirrung in Croatia, as well as in the form of stalking, especially in Alaska. For brown bears, especially the strong Kamchatka or Alaskan bears, stronger calibers with good stopping power are recommended.

If you have any questions or are interested in a mediation offer for hunting trips and hunting for brown bear please contact us via email or contact form.