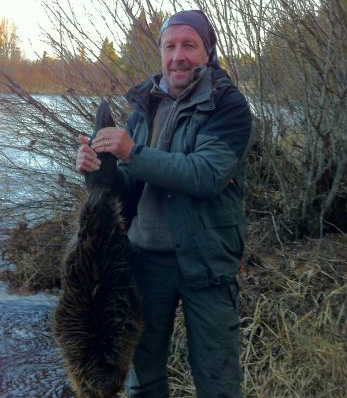 The beaver has a fairly stocky physique. His eyes and ears are small and the latter, as well as the nostrils, he can close while diving. Even otherwise he is very well adapted to life in the water: Between the toes of the hind feet he has webbed, and the tail is covered by a hard, scaly skin and serves as a rudder. The rest of the body wears a coat that is also very practical: it is impermeable to water. At the anus, the beaver have a gland that secretes a fatty secretion, the “castoreum”. This is distributed for grooming all over the body. The animals of the Canadian species have a reddish-brown color; their European relatives, on the other hand, are light to dark brown and often completely black in Russia.

Between January and March the beavers mate – this happens in the water. About 105 days later, the boys are born. The father, who lives his life monogamously with his beaver-lady, then has to move out of the common building temporarily, as well as the children of last year. The rodents live together in family communities, which mostly consist of three generations. At the age of two, the young animals then go their own way, after all, their mother gives birth again every year. At three to four years, beavers become sexually mature.

Anyone who hears about a beaver first think of the dams and moats that pile up the little builders. The entrances to these dwellings are always under water. For the construction, they first gnaw branches and trunks hourglass-shaped until they fall over. These pile them together with mud and stones until the wood rises above the water level. In the end, they seal the construction with mud and clay. Such structures can reach heights of up to 1.5 meters, and we have already seen dams that were more than a hundred meters long. However, if a river is too wide, the animals also move into a riverbank. As excellent swimmers and divers you can dive for up to 15 minutes. They do not hibernate. Their territory inhabit them in pairs; it is marked with the castoreum.

Beavers feed exclusively vegetarian. They eat herbs, shrubs, young shoots, aquatic plants and tree bark. It is assumed that the medicinal effect of the glandular secretion (“castoreum”, “beaver goat”) of the animals, which was used as a remedy in the Middle Ages and which still occurs today in homeopathy, is due to the diet of the beaver Bark of the willow contains “salicylic acid”, a substance that also occurs in similar form in aspirin. Salicylic acid presumably enters the secretion via the metabolism of beaver and is still somewhat effective in this form.

Bieber meanwhile occur in many European countries as well as in North America. In Europe, they are protected in most countries, hunting exists in Finland and Sweden. The hunt is done either on the water by boat or from the shore in promising locations. As a rule, Bieber are shot with the small ball