Turkey is a hunter’s paradise with the best chance of hitting a strong and mature wild boar. The country with more than twice the size of Germany has a diverse landscape ranging from the Mediterranean, the Black Sea to steppe regions in Asia. Turkey is very interesting both for family holidays and for hunting. 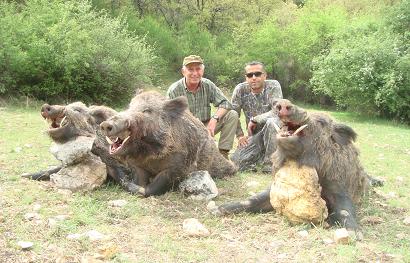 The hunt takes place either from the highseat/ stalk especially during the full moon time or is organized as a drive hunt. In both cases, the hunter proves to have the most significantly lower kill fees compared to hunts in our Eastern European countries. Since the venison is not eaten in Turkey, the local hunting pressure is very low and the wild boar can develop very well. The boars in Anatolia reach significant game weights and tusk lengths of 23-26cm and more are realistic targets.

Hunting season
The boars can be hunted all year long and there are different types of hunting here. The classic winter hunt is hunted especially in snow and at full moon time, but it can also lead to obstruction by the snow here. In general, our partner recommends the months May to August as the best hunting season, here you can hunt longer during the day and the sows are active in the fields and orchards.
Our partner knows his area well, so that depending on the season and month the appropriate places are used.

For most hunters, wildboar hunts means sitting by moonlight. This is also done in Turkey with great success during the day we are baiting and we hunt at night during the moonlight. However, the sows are hunted here also during the day, especially at the fields and orchards so that not only the night can be used in the summer months. It should be scheduled 5 days, usually you have the chance to kill 5-10 boars in this time with tusk lengths up to 20-25cm. The record wildboar to date in Turkey is 35cm. 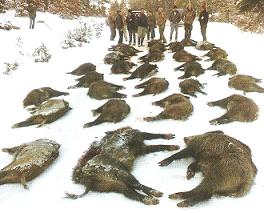 In addition to single trophy hunting, driven hunts are also offered. These are possible from September to February, with December to February being the best times. The hunt takes place in the rather flat hunting areas. Compared to the individual hunt the driven hunts are not quite so successful, especially on male boars. Per day, 3-4 driven hunts are usually organized so that in 5 days a good number of killed game can be expected. In the driven hunt, the kills are not extra calculated (also not strong boars) but are included in the package price same applies to wounding. The base price for the hunt includes the transfer from and to Antalya Airport, accommodation, full board, hunt organization and hunting and firearm license.

In Turkey one of the 8 globally huntable chamois species occurs. This small but agile wild goat has a strong and healthy population in the high mountains around the Black Sea region as well as in the hill regions of eastern Anatolia. The main hunting areas are Artvin, Rize, Tunceli, Bingöl, Erzurum and Erzincan. The hunting season on chamois ranges from 1.8. until 31.3.

Red deer
The red deer in Anatolia is a kind of cross breat between the European red deer and the Asian Maral. Compared to their European relatives, they usually achieve better trophy qualities and higher scores in the great outdoors. The antlers are around 10 kg in exceptions are also 12 kg possible, however, the kills are calculated flat rate and not by weight. The hunting grounds are all in central Anatolia such as Afyon, Bolu, Ankara, Denizli, Eskisehir, Karabuk, Kastamonu. The hunting season is from 1.9. until 31.12. whereby 4-6 days of hunting should be sufficiant. The best time is September and October.

The Bezoar ibex is a fascination for most ibex hunters and should not be missed in the trophy room. We can offer the hunt for Bezoar in the Taurus Mountains in southern Turkey, in the areas of Central Turkey and the Black Sea. Despite the harsh nature and rocks in which the Ibexes reside, it is possible in almost all parts of Turkey to hunt the Bezoar without too much effort. The trophies of the ibex are between 100cm and 150cm long. The hunting season is from 1.8. until 31.3. and it should be scheduled 5-7 days.

Roe deer
Roe deer as the smallest huntable deer lives in the forests in the western and central Black Sea region. The main hunting areas are Bolu, Karab and Kastamonu. Compared to Poland or England the roe deer does not offer absolute top trophies here with 500g so that a buck with 400g has to be regarded as a capital. the hunting season is from 1. May to 31.10. the best hunting season is in May and June.

Accommodation
Accommodation for the Turkey hunts takes place in hotels near the hunting grounds. Here, according to the wishes of the hunting guest from normal pension up to the 5-star luxury hotel everything can be booked, before booking we would align accordingly. If a higher rated hotel than the accommodation included in the daily rates is chosen, a surcharge will apply, which is individual depending on the booking.

Our partner Taurus Safaris has leased an area of ​​about 300,000 hectares in Greater Isparta. The area consists of 80% forest and 20% fruit and vegetable crops. In addition to the leased area, which is mainly used for hunting, he has hunting opportunities in many areas of Turkey to other game species. 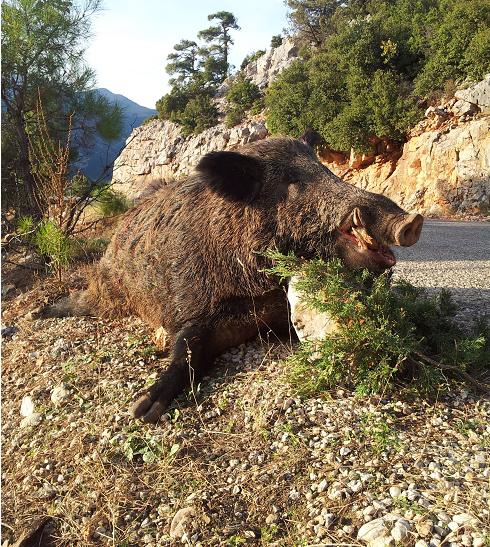 Included in the price of the hunt:
The hunting costs mentioned in the hunts include the following services:
1. Weapons import / export approval
2. hunting license
3. Customs clearance
4. Transfer airport back / forth and rides in the area
5. 1×1 hunting guide
6. Territorial levy
7. Accommodation in the hunting area with full board

We are happy to arrange the hunt for you with our partner. If you have any questions or are interested in an offer for hunting trips and hunting in Turkey, please contact us via email or contact form.

https://www.worldwidehuntingexperience.com/wp-content/uploads/2021/04/logo_WHE-300x210.jpg 0 0 jagdreisen_fabrig https://www.worldwidehuntingexperience.com/wp-content/uploads/2021/04/logo_WHE-300x210.jpg jagdreisen_fabrig2018-06-02 19:04:462021-04-03 13:50:05Hunting in Turkey
Scroll to top
We use cookies on our website to give you the most relevant experience by remembering your preferences and repeat visits. By clicking “Accept”, you consent to the use of ALL the cookies.
Cookie settingsACCEPT
Manage consent

This website uses cookies to improve your experience while you navigate through the website. Out of these, the cookies that are categorized as necessary are stored on your browser as they are essential for the working of basic functionalities of the website. We also use third-party cookies that help us analyze and understand how you use this website. These cookies will be stored in your browser only with your consent. You also have the option to opt-out of these cookies. But opting out of some of these cookies may affect your browsing experience.
SAVE & ACCEPT