You are here: Home1 / Hunting destinations2 / Europe3 / Hunting in Spain

In Spain, we can offer them both individual hunting for trophy game as well as hunting as Monteria, the traditional Spanish hunt.

The hunting of wild boars in Spain is similar to that in Germany. On the one hand the wild boars are hunted in the Spanish form of the driven hunt, the Monteria, on the other hand by purposeful sitting on feed places. The second way the sows are baited is especially promising when it comes to hunting for trophies. The Monteria offers more variety because in addition to wild boars usually other game can be hunted with.

The ibex hunt is probably the most well-known hunt for Spain. Our hunting grounds are located in the mountains and allow a magnificent view over the Spanish plains and combine the hunt with the possibility of forgetting the daily routine in nature. In addition, Spain also offers the ideal game for hunters with little time to travel, because a 2-day hunt trip is sufficient.
The Ibex can be hunted Spain in four different regions. All of these regions offer the ibexes very different habitats but are characteristic of the stony cliffs which all have in common. The areas range from the sea side to the high mountains (Sierra Nevada and Sierra de Gredos).Below you will find the huntable Ibex species:
– Beceite Ibex
– Sierra Nevada Ibex
– Gredo’s Ibex
– Ronda Ibex
Hunting season: October to May 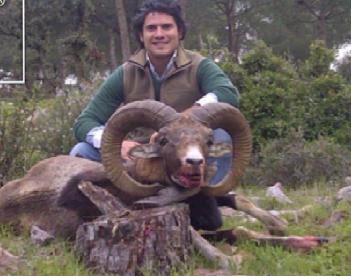 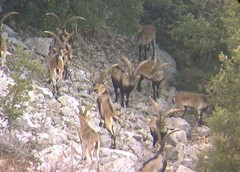 In Spain we can hunt the European moufflon. The moufflon especially the old rams carry long horn trophies and are not easy to hunt. In Spain, the mouflon is often night active and lives in the thick bush.
Hunting season: October to February

The Iberian red deer is a slightly smaller breed with body weights of 80-100kg. Compared to the European red deer the antlers are not so long and strong, but still very good with trophies of up to 18 or 20 endings and a strong crown formation. Spain has an estimated population of 350000 deer. The best opportunities for a good trophy exist during the rut in the second half of September. Our partner has different areas throughout Spain and they are selected according to the expectations of the hunting guest.Hunting season: September to February

In Spain, both the Cantabrian and the Pyrenees Gams occur. The main hunting method is stalking. You will be accompanied by an experienced professional hunter with whom you will hunt the corresponding trophies in the area. The hunt takes place as a mountain hunt, so they usually hunt all day and lunch takes place while hunting in the mountains. The transport to the corresponding hunting areas takes place by jeep, then the hunt continues on foot. During the hunt, some of the hunting lodges made of stone in the mountains are also used to save the ascent and descent for the next day.
Hunting season: October to December and March to June 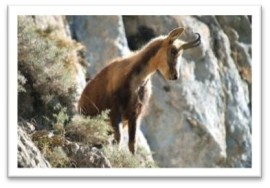 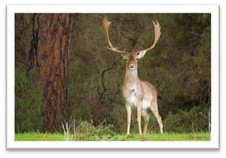 Fellow deer
The fallow deer is not as numerous as the red deer but we can also offer hunting for this deer species in areas near Madrid. The hunt for fallow deer takes place both as a stalk and as part of a monteria.

The traditional big game hunt in Spain is the Monteria where beaters and dogs are used. Fallow deer, red deer, mouflon, wild boar and female deer are hunted here. Depending on the Monteria you can hunt indefinitely or up to predetermined limits on game species. The shooting distance is usually 50-200m on the pulling game. After the hunt, a lunch will be held in the field for all participants while the course is prepared in parallel. The Spanish Monterias are organized very precisely and the number strictly adapted to the existing hunting areas, with a minimum of 10 hunters.
Hunting season: October to February 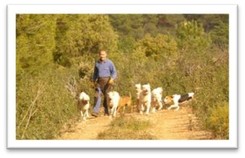 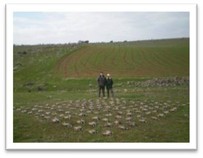 Small game
For groups of 8-12 shooters we can offer wild boar hunting for red-footed partridge at an expected rate of 500-700 chickens per day.
Hunting season: October to February

hunting areas
The hunting areas are distributed throughout Spain and are selected depending on the desired wild species. Our partner has many years of experience in hunting in Spain and focuses on specially selected areas in which they can hunt for different game types but also with different levels of difficulty.

Included in the cost of Spain packages:
Accommodation in lodge / hotel (3-4 *) with full board
Transfer to / from the nearest airport and in the hunting areas
Hunting permit and hunting insurance

If you have any questions or are interested in a mediation offer for hunting trips and hunting in Spain, please contact us via email or contact form.