You are here: Home1 / Hunting destinations2 / Europe3 / Hunting in Slovenia

Hunting areas
The hunting ground which our partner hunts in Slovenia is one of the largest hunting districts in the Republic of Slovenia. In fact the total hunting area is almost 43,000 ha and stretches from the western Karawanken over the Kamnisko-Savinjske Alps to the Logarska dolina valley. Moreover the hunting district is divided into 13 hunting grounds ranging from 400 m to over 2,500 m whereas each area has its own professional district hunter.

Each hunting guest decides in advance, where he will be accommodated. You can opt for a hotel, pension, rural tourism or accommodation in a hunting lodge. In all hunting lodges you will have self-catering. These lodges are in the heart of the districts. In addition we can also offer half and full boarded accomodation in guesthouses and hotels.

Getting there
The hunting ground is well connected with the existing main roads and therefore easily accessible. From Brnik airport it is a good 15-20km, but from the Slovenian capital Ljubljana 30 kilometers. If you land at Brnik airport, it is possible to be in the hunting ground after only two hours of formalities there. For the airport  pick you can either take a taxi, rental car or in some areas we can pick you up. In conclusion due to the small size of Slovenia it is very easy to come to the hunting areas from nearly all airports.

In Slovenia you can hunt for chamois, roe deer, red deer, moufflons, wild boar and the Alpine ibex. However most of the game in the hunting district is made up of the chamois, which belong to the European top according to their quality. Chamois hunting in the idyllic alpine world is considered one of the most beautiful hunts. We can organize practically regardless of the physical condition of the hunting guest. For instance you can hunt the chamois from the middle to the high mountains and the hunting season lasts from the beginning of August to the end of December. In addition a special feature of the hunting grounds is the population of the Alpine ibex with mature individuals, which are well suited for trophies.

Beside the mountain game we can also offer limited slots of brown bear hunt in Slowenia. The hunt is mainly done on the bait. Slovenia offers a good population of bears. However the bears are smaller than those in Croatia or Russia. As the licenses are very limited it is most important to book early.

Evaluation and transport
The hunting trophy is prepared for you to transport it home by the district hunter. In addition the trophy will be evaluated for you in accordance with the valid CIC forms. This will form the basis for the calculation and invoicing according to the valid price list. In summary the bill is paid by you after the hunt on site. 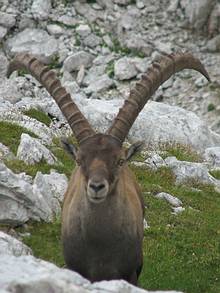 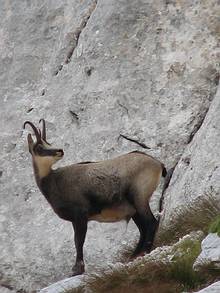 Slovenia has a similar climate as Germany with different weather conditions in all four seasons. In addition, however, there are three major climatic zones that influence the weather. Firstly in the mountains, the severe alpine climate prevails, secondly the coastal region characterizes the sub-Mediterranean climate and thirdly the continental climate prevails in the plains in the northeast of the country. The average temperatures in July are over 20C, in January around 0C.

In addition to the daily rates
Processing fee 120 Eur
The transport costs in the area with a car of the professional hunter are with 0.73 EUR / km incl. VAT. to pay.
Accommodation, tips
Flight costs to Slovenia (ca.160Eur) or arrival by car
airport transfer
Leihwaffe
Packaging and shipping of trophies